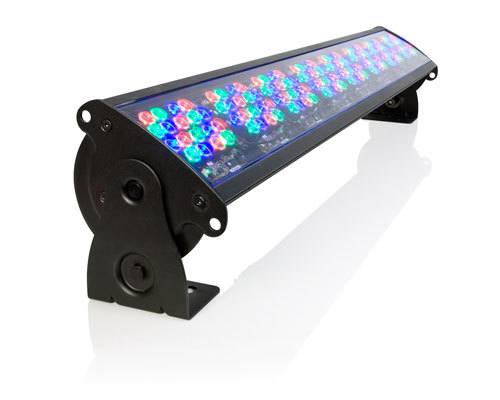 Why Use LED Stage Lighting?

When and Why to Choose the LED Option

Many event companies and coordinators are debating the use of LED stage lighting compared to the conventional lighting they have always used. One of the biggest selling points on LED over a more conventional light is that LEDS require a fraction of the power and that tends to cut down your overall cost of use. But what else sets LED fixtures apart?
Based on some of the questions we have received, our own lighting techs had some thoughts on when and why LED might be preferable to a more convention fixture- and when they might not.
When Heat Matters:
Many of the questions being asked have to do with the life span of LED lights and how much heat they put off.  LED units usually put off less heat but, this can depend on the size of the unit as well. The bigger the light the more heat it is going to put off weather it is an LED or a Conventional.
Upkeep and Maintenance-:
LED’s typically have a longer lifespan and you aren’t going to be swapping out lamps on your units as often as you might on their counterparts. That’s offset though by the fact that LED units do generally have more complicated parts, so there is a bit more care and attention required. A lot of companies would rather cut down on the upkeep of their light so keep that in mind when using LED’s.
Reliability:
Sure, they require a little more TLC, but this doesn’t mean however that they are any less reliable than a conventional light- as long as they are well maintained, LED units tend to be VERY reliable powerhouses!
Set Up:
There aren’t many differences in the setup time or difficulty of either LED stage lighting or conventional stage lighting- they are both going to be very hands on. However there are differences when it comes to the programming of the show- LEDs will often require a little more time on the programming side. Make sure your design team knows this in advance!
Facility Rules:
Finally, it is always good to know if there are situations where you should not be using LED stage lighting, as well as if there are specific places that only want you to use LED stage lighting. The answer to both of these is typically no but you need to check with your venue to make sure that this is the case, so you don’t run into issues later on. Some cities (such as Las Vegas) put an emphasis on using LED thanks to the lower heat output- especially in convention centers, hotels, and other inside venues!
If you are considering LED lighting for your next event, be sure to check out our rental selection!

5 Ways to Use Stage LED Lights the Correct Way

What Does Intelligent Stage Lighting Mean?

Trade Show Booth Lighting: What to Ask Your Designer

Being Strategic with Stage Lighting and Effects